FBC represented The People’s Republic of China in the State of Israel in signing an agreement for the purchase of land in Ramat Hachayal, Tel Aviv, on which a 7-storey building has been built on an area totaling approximately 16,000m, in addition to a 3-storey basement on a 16,000m area of land.

This land will be used to relocate the Embassy of the PRC in the State of Israel, currently located at 222 Ben Yehuda Street, Tel Aviv.

This agreement between the Government of the PRC in the State of Israel gave shape to a number of international aspects, namely, that in addition to the commercial aspect of this agreement, international diplomacy between two states is expressed in the involvement of multiple authorities, such as the Prime Minister of the State of Israel, the Israel Ministry of Foreign Affairs and the Ministry of Defence.

Furthermore, this transaction serves to show how the Treaty of Vienna, which essentially regulates relations between states, is applicable in a commercial transaction such as this. 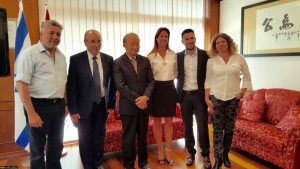 Representation of Luminera Derm Ltd. and its affiliated companies in a share and asset transaction, pursuant to which Luminera sold its derm...

Representation of Temasek, a Singapore investment fund, in signing a definitive agreement for the acquisition of 85% of Rivulis Irrigation L...